Pairing bourbon and bacon is a southern staple. The savory and sweet indulgences are a match made in pure southern love. Aside from the countless recipes, perhaps the true value of bourbon and bacon lies in expert tasting notes, generations of secrets, and a bit of southern humor. Purveyors have shared their expertise of bacon tasting, the best cuts, and tips to preserving the meat.

There is a distilling process for making bourbon, and there are many types of bourbon to taste. The flavors are referred to as notes. Bourbon is a type of American whiskey that is strongly connected to the south. Origins trace back to Kentucky and over the last decade bourbon has become increasingly popular. Its complex flavors lend itself to being served in a glass over ice, mixed with water or added into cocktails. In order to legally be called bourbon the mixture must be a grain mixture of at least 51% corn distilled domestically, be no more than 160 proof before putting into a barrel to age, and, finally, bottled at no less than 80 proof. 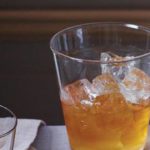 There are six categories of bourbon:

High Rye– Made with barley, rye and corn, Bold and spicy flavor.

Wheated– Wheat is added to the mash bill. Nutty and soft on the palette.

Bacon is a meat that is prepared from cured pork using salt, brine or dry packing. It can be dried, smoked or boiled. In the south bacon is savored and a prevalent ingredient in many recipes. Meat and seafood wrapped in bacon, vegetables with bacon and yes, even desserts with bacon! The southern love affair with bacon is evident in the festivals, tastings, bacon & bourbon themed bars, dinners and events. The traditional smoked bacon is the most commonly consumed type is most often paired with bourbon recipes. 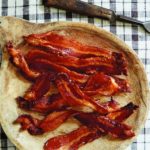 There are many types of bacon:

Slab Bacon-Purchased from a butcher and is not sliced.

Smoked Bacon-Can be purchased smoked or smoked on a grill.

Among some favorite ways to serve bourbon and bacon is boozy bourbon bacon, bourbon bacon jam, bacon wrapped tenderloin with bourbon sauce, bacon bourbon brussel sprouts, bourbon vanilla cupcakes with bacon, maple bourbon burgers, bacon and bourbon chili, bacon and bourbon marinated salmon, and glazed donuts with maple bourbon bacon. There are annual festivals dedicated to Bacon & Bourbon all over the south that are a great way to experience it firsthand. With a little hunting, it will be easy to seek out venues and events to sample bourbon flights and unique recipes that gloriously pair the two. Have fun tasting and try your own recipes at home! 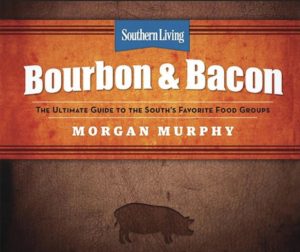 1 (750-milliliter) bottle of your favorite bourbon

Remove ¼ cup of bourbon from the bottle. Pour warm bacon grease into the bottle. Cover and let stand 4 hours, shaking bottle occasionally. Chill 3 to 7 days. Pour bourbon through a wire mesh strainer lined with a coffee filter into a bowl, discard filter. Clean bottle. Pour strained bourbon into bottle and store at room temperature for up to 6 months.

Total time does not include 3 days for chilling.